I’ve been playing The Simpsons: Tapped Out phone game for a few years now. The game is running out of a steam a bit because they’re running out of characters, but it’s still fun to build and re-shape Springfield.

Today, they unveiled a new feature letting you see your entire Springfield at once. Here’s mine …

WEST: That’s “Springfield Heights,” an area they opened up past the mountains, and it’s supposed to be rather ritzy. I thought about moving junky stuff there, but it would involve too much moving. So I have the various mansions there, along with a polo club and the Stonecutters HQ.

WATERFRONT: The yachts are at Springfield Heights. The rest of it (the Squidpost) includes a couple of rides that used to be in Krustyland.

NORTH: That peninsula is where I stuck everything from Halloween events, including this year’s. Closer to town, I have a few high-rises leading into the Vegas-style strip.

Tucked in between that, just north of the airport, is Canada. That’s where I have Christmas stuff now, but I can move it to the open area with the four ponds farther south. I can adjust the size of those ponds so that I have just a couple of things there for Valentine’s Day but can blow it out for Christmas or Halloween.

SOUTH: Krustyland used to be something separate, and you had to take a shuttle to it. They integrated it with the rest of Springfield around the same time they started Itchy and Scratchy Land. I’ve basically turned it into a three-part amusement park. Krustyland has kiddie rides and some Krusty-themed stuff. The larger rides are in I&S Land. Then I have an Epcot/World Showcase thing going on around that lake, including some performance spaces as shown here …

Sideshow Bob and family are on the opera stage. Mayor Quimby is speaking at the amphitheater, which has a few options — Marge does something, Comic Book Guy can cosplay, etc.

The rock stage is basically the only interesting place for drummer Nick Delacourt, who was in some episode, somewhere. Some of the people I have on other stages can be here, and Bleeding Gums can be on any of them. The angry mob was part of the Halloween event, but I moved it here to be a rowdy crowd.

I skipped the pop stage, which can include Bleeding Gums, Lisa, Weird Al or Maggie, but it’s also the main stage for the Party Posse (YVAN EHT NIOJ!). This is the hip-hop stage, where Bart can perform in a different guise and Krusty can pop up. So in this case, I have three rappers and an accordion player. Cool.

A few other snapshots … 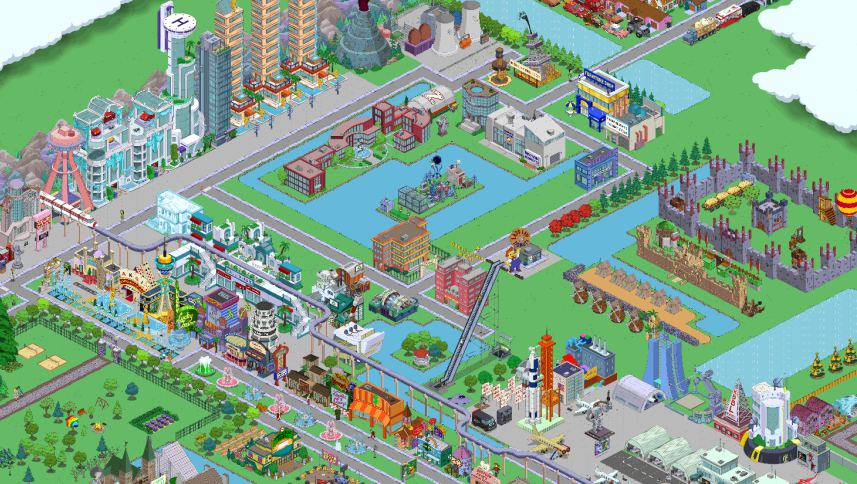 The “Vegas” strip with a lot of fountains and casinos, then a high-rise strip right against the mountains (not visible on the screenshot for some reason). The airport and a NASA launch site are at bottom right. I have an office and research park behind Vegas. Then, for some reason, a medieval fort. 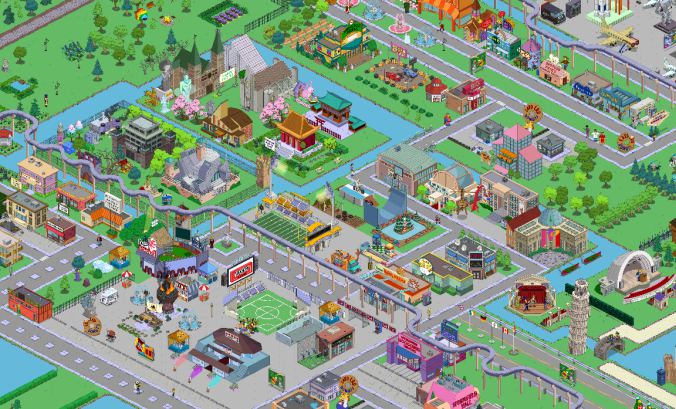 Two islands in the upper-left here — two prisons on one, and then Religion Island, featuring the traditional Springfield church along with the glass cathedral, Maude’s statue and a Buddhist temple. Above that are the dog track and go-kart track, slightly separated from the sports district.

In the sports district itself, start at the lower part, just off center, for the sumo arena. That leads to a weird soccer-ish stadium, then the baseball and football stadiums at left. You can also see the ramp where Poochie skateboards and dunks, along with the pit where motorcycle daredevil Lance Murdoch falls into the shark tank. There’s also a Bowlarama.

It’s tough to squeeze in the whole entertainment area. Maybe if you right click and open in a new tab? Anyway — you can see the performance stages and international things around the water, just like World Showcase at Epcot. At the lower corner is the thing that looks like the big Epcot ball. I stuck the Eiffel Tower on an island in the middle of the lake, and there’s a group of people stuck at the base. The other thing jutting out into the water is a water show.

At right is a zoo. Then behind Epcot and the zoo is the rural district.

And at bottom left, you’ll see Krustyland, then my name spelled out in flowers. I occasionally convert DURE to DUKE, which only take a couple of moves.