Star Wars NEVER made sense. Get over it.

Oh no! The Last Jedi ruins our sense of canon! Why would Luke act that way?

(For the record, Mark Hamill has walked back some of his misgivings:)

I regret voicing my doubts & insecurities in public.Creative differences are a common element of any project but usually remain private. All I wanted was to make good movie. I got more than that- @rianjohnson made an all-time GREAT one! #HumbledHamill https://t.co/8ujJfBuEdV

But the Star Wars saga has always been embedded in our culture despite its flaws. I don’t just mean the things that make less sense as more movies are made, such as Kenobi’s failure to recognize R2 or the one that recently popped into my head — why did the Hidden Chosen One, The Son of Anakin Skywalker, hide out on Anakin’s home planet with the last name “Skywalker”? Why isn’t he “Luke Lars” (Uncle Owen’s last name) or “Luke Smith” or “Luke Totally Not a Fallen Jedi’s Son”?

We had those problems in the original trilogy as well. Mostly the “OMG, if Leia always knew Luke was her brother, then why …” problem.

But even in the first film, we have a few issues.

But it’s not just that. In the attack on the Death Star, we see Porkins losing his battle with gravity and joining many other longtime rebels in the great beyond. All of these deaths pass as routine. But when the hillbilly kid who just turned up at the base flies through something hot, everyone’s all, “Luke! Are you OK?”

And speaking of expendable rebels, why does Wedge get a free pass? X-Wing fighters don’t have any rear weapons, so the wingmen in the Death Star trenches aren’t really doing anything other than flying around as human shields to make it slightly more difficult for TIE fighters to take out the dude with the targeting computer switched on. But when Wedge takes a glancing blow to his ship, he gets a doctor’s note excusing him from the rest of the battle. 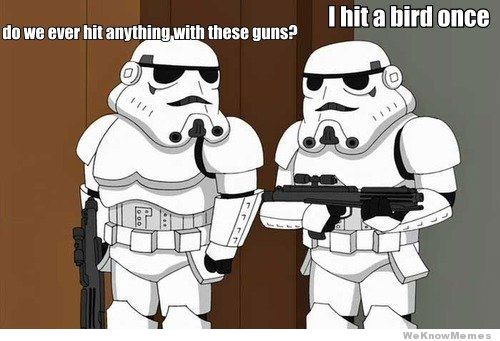 Which would be somewhat understandable if not for:

A. Scenes in which the targets (Luke, Han, an occasional droid) are just standing right there.

B. Say it with me now: “These blast points, far too accurate for Sand People. Only Imperial Stormtroopers are so precise.” That’s a bit like a Delta in Animal House saying Bluto is the champion of dieting and sobriety.

“They let us go.” Oh really, Leia? That’s your conclusion, even after you just hugged a Wookiee to celebrate Han and Luke’s victory over the TIE fighters (and, given the massive explosions that TIE fighters apparently have when blasted, somehow managing to do so at sufficient range to the Millennium Falcon wasn’t melted)?

Did no one on the Death Star think to inform the TIE fighter pilots that they needed to back off? Or did they just receive a mission briefing like this:

“OK, folks, our prisoners are escaping.”

“No problem, sir! We’ll blast them out of the sky, er, space or whatever.”

“Actually, no. Go out and pretend that you’re doing that. Land a few shots on the ship’s shield and do that funky side-to-side thing that makes you really difficult to hit. But then just stop and let them shoot you.”

“Why the hell would we do that?”

“Look, this whole thing is about to be blown up in … well, it apparently takes less than a day to get to the rebel base … so you’re just saving yourself some aggravation.”

So fret all you want about Luke’s grumpiness in The Last Jedi or Rey picking up light saber skills as quickly as … well, as quickly as Luke did. The fact is we fell in love with a flawed mythic saga because of the imaginative, immersive universe (or galaxy) with John Williams music and classic characters. The light side outweighs the dark side.

Now if you’ll excuse me, I need to get to work. My next story is due in three parsecs.