(Incidentally, I’ve set up a page on this site compiling the links I find on bullshit. Nominations welcome, as you can tell from what I’ve written here, all corners of the sociopolitical fringe are welcome.)

Every once in a while, I’m thrilled to find that some superior writer has taken an idea I’ve never adequately expressed and summed it up succinctly and brilliantly.

Yesterday, I came across this piece from the Atlantic’s Kurt Andersen covering ground I’ve covered before — how the lefty-academic principles of postmodernism led us into a morass of alternate reality that the right wing has now deftly exploited. (In other words: Oh, you say all truth is a social construct? OK, then I’ll say whatever I want — or whatever gets the Republican base all riled up. See this piece in particular, in which literary critic Michael Bérubé sees the academic left’s arguments being turned into climate-change denialism and creationism. But I’ve been talking about it since at least 2004.)

It’s not succinct. And in places, it’s not brilliant. What editor let him drive away tons of readers by listing simple religious belief among all the howling inaccuracies that Americans believe? Have we not yet learned that plenty of Christians go along for the “Christ, love and compassion for the underprivileged” parts of the religion (all backed up by theological and occasionally historical evidence) but not the “bash them pointy-heads telling us we came from monkeys” parts (NOT backed up by theological or any other evidence)? Sure, there are plenty of knuckle-dragging evangelicals out there, but there are also plenty of Nadia Bolz-Webers, along with plenty of people who are being raised “spiritual” in the sense that they yearn to understand the eternal while already understanding that we’d better act like good people while we’re on this temporary home called Earth.

But it’s worth muddling through that part and getting to the parts that I’m simply going to QFT here. (Do people still say Quote For Truth? Or am I supposed to say “lit”? I don’t speak Millennial.)

Coincidentally, I just read a good piece on conspiracy theory research by Illuminati apologist, I mean, Barnard professor Rob Brotherton, who says history tells us the number of people who believe conspiracy theories stays somewhat stable over time. But the Internet can magnify such things, of course, and it gives the fringe a voice. The question is whether the marriage of convenience between the Alex Jones crowd and the supposedly rational wing of the Republican Party can last much longer.

I also read something recently about stoners’ tendencies to buy into conspiracy theories because it gave them someone else to blame for their lack of achievement, but naturally, I forgot to bookmark it. Must have been on a contact high from the Pink Floyd concert I saw in the late 80s.

In any case, Andersen does indeed show how this junk has gone mainstream:

A senior physician at one of America’s most prestigious university hospitals promotes “miracle cures” on his daily TV show. Cable channels air documentaries treating mermaids, monsters, ghosts, and angels as real. When a political-science professor attacks the idea “that there is some ‘public’ that shares a notion of reality, a concept of reason, and a set of criteria by which claims to reason and rationality are judged,” colleagues just nod and grant tenure. The old fringes have been folded into the new center. The irrational has become respectable and often unstoppable.

Note that he’s not excusing the academic left here. This isn’t just the Trumpkins and the proudly ignorant guys who make up that base.

And it’s actually in our DNA as Americans:

America was created by true believers and passionate dreamers, and by hucksters and their suckers, which made America successful—but also by a people uniquely susceptible to fantasy, as epitomized by everything from Salem’s hunting witches to Joseph Smith’s creating Mormonism, from P. T. Barnum to speaking in tongues, from Hollywood to Scientology to conspiracy theories, from Walt Disney to Billy Graham to Ronald Reagan to Oprah Winfrey to Trump. In other words: Mix epic individualism with extreme religion; mix show business with everything else; let all that ferment for a few centuries; then run it through the anything-goes ’60s and the internet age. The result is the America we inhabit today, with reality and fantasy weirdly and dangerously blurred and commingled.

Sucker born every minute, right? And the next section is devoted to the hippie movement, LSD, New Age and the rest of the counterculture that figured it would cool to subvert reality. It probably was, but the unintended consequences are a bitch.

All of this found its ways into academia, particularly the social sciences. I know I’ll sound like my dad, Dr. Dure of the biochemistry department, but I’ve started to realize the social sciences have an inherent jealousy toward science. They want to be able to “prove” things the same way my dad would demonstrate characteristics of plant proteins in his lab. So they construct models that make sense on an internal level, but they forget the “garbage in, garbage out” maxim. See my response (which was “pending approval” for days) to some sports economics stuff at Deadspin.

That discussion features a hilarious exchange showing how difficult it is for facts to have any impact: 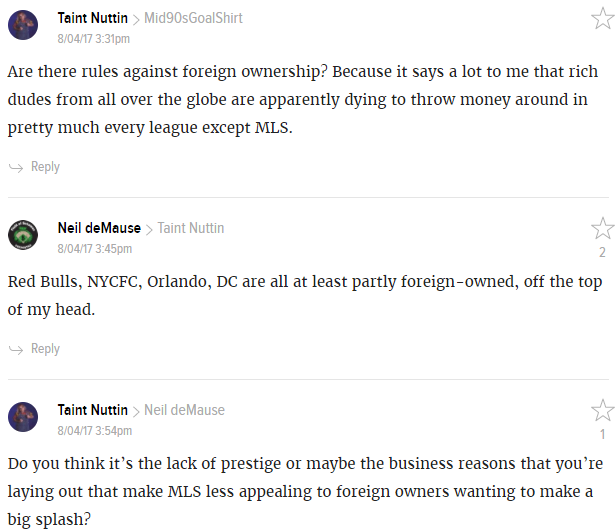 But not even my good old reliable liberal arts major is safe from this sort of thing:

A more extreme academic evangelist for the idea of all truths being equal was a UC Berkeley philosophy professor named Paul Feyerabend. His best-known book, published in 1975, was Against Method: Outline of an Anarchistic Theory of Knowledge. “Rationalism,” it declared, “is a secularized form of the belief in the power of the word of God,” and science a “particular superstition.” In a later edition of the book, published when creationists were passing laws to teach Genesis in public-school biology classes, Feyerabend came out in favor of the practice, comparing creationists to Galileo. Science, he insisted, is just another form of belief. “Only one principle,” he wrote, “can be defended under all circumstances and in all stages of human development. It is the principle: anything goes.”

Suddenly we’re citing Robert Plant. “What kind of fool am I?” indeed.

I wonder what sort of grade I would get in the professor’s class if I said, “Facts are less of a social contract than the lack of facts, which is constructed in an ivory tower. Just be glad the tower itself was constructed by modern engineers, not postmodern fact-fudgers.”

And in another field …

In the ’60s, anthropology decided that oracles, diviners, incantations, and magical objects should be not just respected, but considered equivalent to reason and science. If all understandings of reality are socially constructed, those of Kalabari tribesmen in Nigeria are no more arbitrary or faith-based than those of college professors.

My goodness. It’s getting more and more difficult for us college guys to say 21st century bullshit is all generated by the coal industry, isn’t it?

In fact, some of my encounters with people in the past year have made me think sizable portions of the left care less about facts and more about being hipper-than-thou. Your expertise is no good here if you’re discussing something with a “person of color.” The “person of color” — or whoever’s most oppressed in a conversation, even if that person of color comes from a comfortable suburban household and has experienced maybe 0.1% of the prejudice any 60-year-old black man has faced — is always right. I have no idea when Asian-Americans decided that they’re empowered to speak for African-Americans. I’m guessing the NAACP missed that memo.

At last, Andersen gives academia a break and shows how the political right hijacked postmodernist doubt.

Conservatives hated how relativism undercut various venerable and comfortable ruling ideas—certain notions of entitlement (according to race and gender) and aesthetic beauty and metaphysical and moral certainty. Yet once the intellectual mainstream thoroughly accepted that there are many equally valid realities and truths, once the idea of gates and gatekeeping was discredited not just on campuses but throughout the culture, all American barbarians could have their claims taken seriously. Conservatives are correct that the anything-goes relativism of college campuses wasn’t sequestered there, but when it flowed out across America it helped enable extreme Christianities and lunacies on the right—gun-rights hysteria, black-helicopter conspiracism, climate-change denial, and more.

Andersen then takes us through the 1970s UFO boom and finds that people settled into a nice capitalist groove in the 1980s. Mostly. By the late 80s, changes in the media landscape begat Rush Limbaugh, who begat Fox News, which begat … etc.

He adds a nice jab at libertarians — “an ideology most grow out of” — and the Republicans’ selective reading of the philosophy (bail out businesses but not people, have guns but not sex or drugs), but I’m not really sure how it relates to his thesis. And I’m probably pushing “fair use” law on how much I’ve quoted to this point.

(In fact, let’s be fair on fair use and mention, as we finally learn at the end of this article, that this is adapted from Andersen’s upcoming book, which deserves a good plug here.)

So I won’t spoil the last few paragraphs, which are indeed about Trump, someone whom Andersen has covered for decades. Go ahead and take a look. You won’t be surprised.

But the story succeeds in demonstrating the roots of our issues with facts. What I take away from it, in the spirit of not making everything totally relative, is this:

The academic left certainly aided and abetted the war on truth, and it does so to this day. But in mainstream politics, it’s the right wing that has given the lunatic fringe the keys to the castle.

Andersen doesn’t talk here about some of the things I’ve noticed in my journalism career. Start with the 1994 midterms, when Rush Limbaugh convinced everyone the country was still in recession and Newt Gingrich — still fighting the bad fight against facts to this day — swept to power. In doing so, the Republicans gleefully unleashed the forces of a misinformed public.

And now, like an attack dog that turns on its master, we’ve seen the Tea Party and the Trump Party sweep out the “establishment” Republicans. It was bound to happen. You can’t rile up a mob and then expect it to see reason.

But any sort of progress requires facts. To put in terms Trump will understand — if you’re going to put up a skyscraper, you’d better have engineers who aren’t thinking all math is relative. You can’t make progress on health care if you think a lack of a work ethic is the only reason people are ever uninsured and sick at the same time. You can’t make progress on dealing with North Korea if you don’t bear in mind the ramifications of a small peninsula with a lot of weapons pointed at the neighbors. You can’t keep the Atlantic from swallowing Miami and Manhattan if you deny basic facts about how carbon dioxide and methane act in the atmosphere.

So that’s why all of these forces are a little scarier than, say, Hillary Clinton’s email server or Evan McMullin’s anti-abortion stance.

One thought on “How left-wing relativism begat multi-wing bullshit”